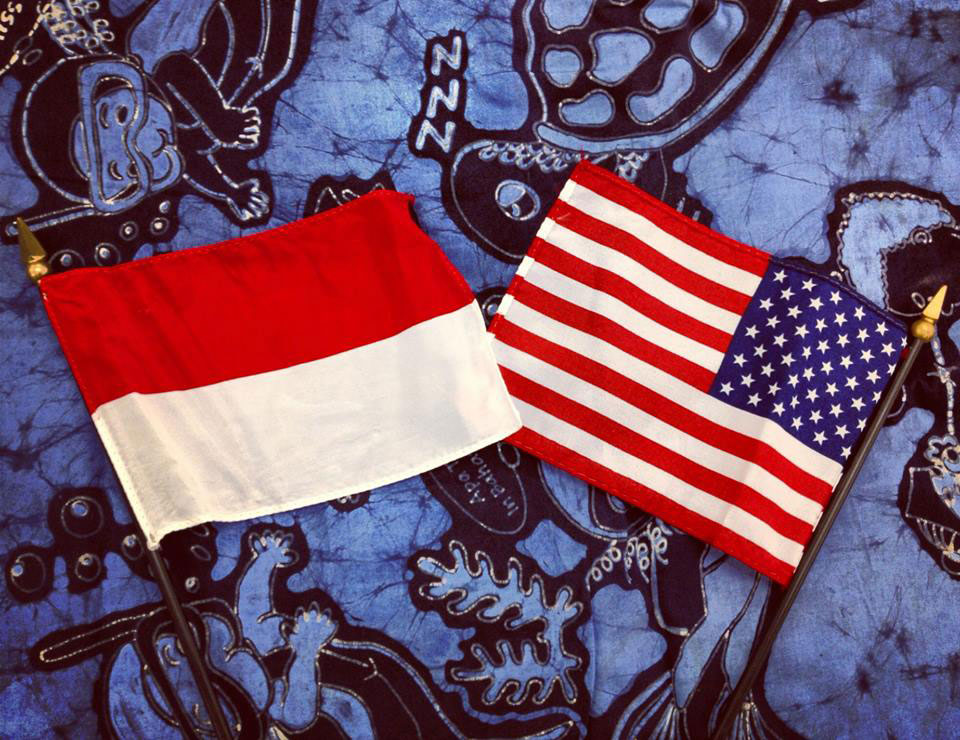 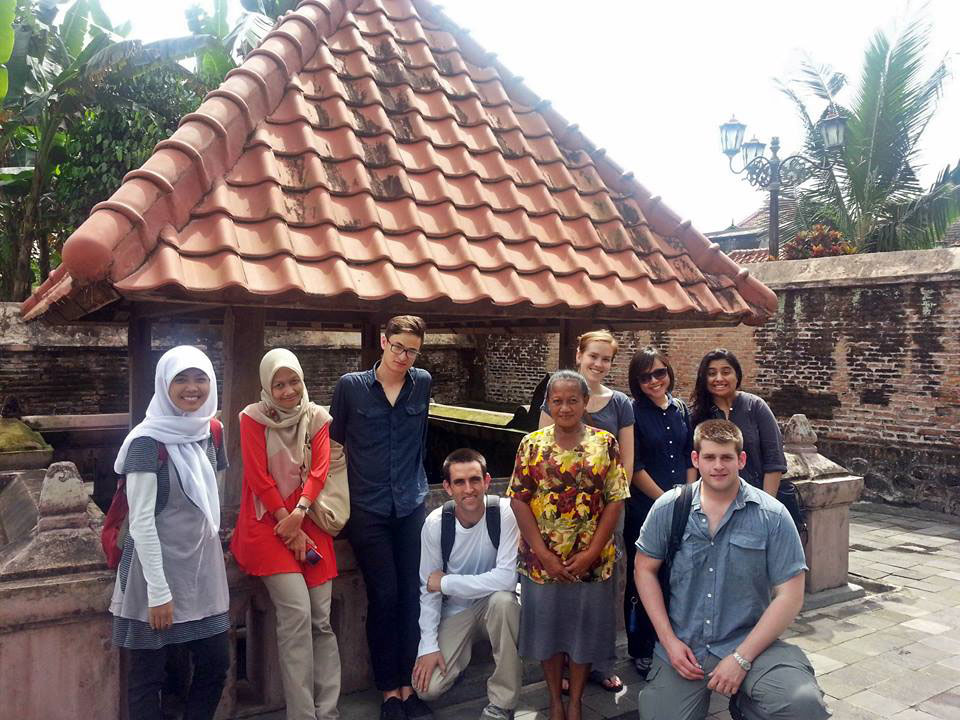 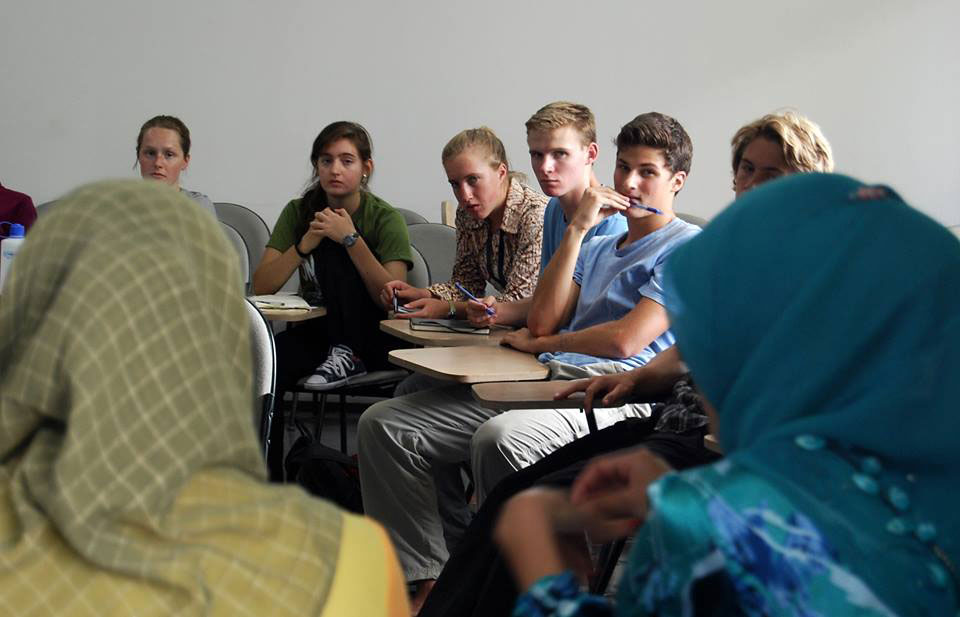 The Council’s extensive network has continued to be beneficial to many Indonesian and American counterparts in the education sector.  USINDO has continued to facilitate a variety of partnerships and meetings through this network. Recent activities include:

Facilitating meetings between University of Maryland and the Indonesian Ministry of Communication and Public Information.

USINDO helped to facilitate a meeting between the University of Maryland and the Indonesian Ministry of Communication and Public Information regarding a possible collaboration in developing the organizational design of Indonesia’s new Cyber and National Encryption Agency (BSSN) – the organization charged with securing cyber infrastructures deemed critical to economic development and national security. This meeting was held in July 2017 as part of the visit to Indonesia of Dean of the University of Maryland Public Policy School, Robert Orr.

USINDO is helping to facilitate a meeting between University of Colorado Boulder and representatives from the Indonesian Endowment Fund for Education (LPDP). The delegation will be visiting Indonesia in February 2018 to attend a series of EducationUSA sponsored higher education fairs, and are interested in meeting with representatives of the LPDP scholarship program to explore more opportunities to encourage qualified Indonesians to study at Colorado, an LPDP-approved university.

The presidents of the United States and Indonesia “are pleased to welcome the formation of the U.S. – Indonesia Council for Higher Education Partnership, which seeks to harness the energies of the non-governmental, public, and private sectors in both countries in support of expanding bilateral programs in higher education including to help build Indonesia’s capacity to provide world-class university education and to double within five years the number of American and Indonesian students who study in each other’s country.”

Five Years of Connecting American and Indonesian Students and Universities

The two presidents set out a five-year timeframe for enhancing U.S.-Indonesian higher education collaboration and within these five years, the U.S.-Indonesia Joint Council on Higher Education Partnership (“Joint Council”): 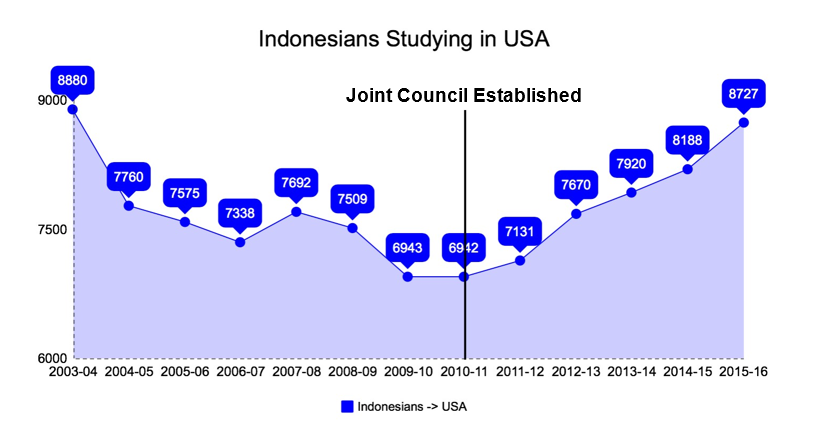 When the Joint Council was established, enrollment of Indonesian students at American universities was trending down while the number of Americans studying in Indonesia was flat.  Thanks to the collaborative efforts of the Joint Council, American and Indonesian universities, and support from the public and private sectors, we have helped to reverse the downward trend and reach a new high in the number Americans studying in Indonesia.

This past year saw the highest number on record of Americans choosing to study in Indonesia.  Up approximately 100-fold from a decade ago, 534 Americans studied abroad in Indonesia. 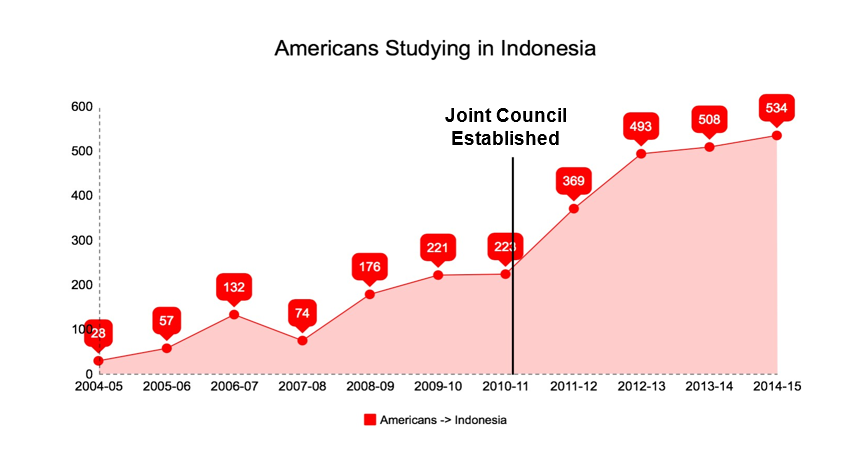 All numbers are from the 2016 Open Doors Report funded by the U.S. Department of State and published by the Institute of International Education.

Separate from the collaborative efforts mentioned above, the Joint Council has helped establish student pipelines between American and Indonesian universities to increase student exchange.  Since 2011, the Joint Council, with great support and effort from universities in both countries, has helped over 1,000 Americans and Indonesians study in each other’s respective countries through its university partnerships.  In the years to come, we anticipate that these pipelines will continue to strengthen our higher educational ties and provide opportunities for future student mobility.

The Joint Council, working with universities in both countries, has helped establish the following eleven partnerships primarily in the science and technology fields.  These partnerships have led to greater faculty research collaboration, increased study abroad opportunities, and serve as pipelines for student mobility.

Resolving Constraints to Choosing the U.S. for Study:

In response to such low enrollment numbers at American universities, the Joint Council established focus groups with Indonesian students and learned that the cost of taking the Graduate Record Examination (GRE) was a major constraint that prevented funded scholars from even applying to US universities.

The Fund has been extremely successful and more than doubled the number of LPDP scholars studying in the United States. 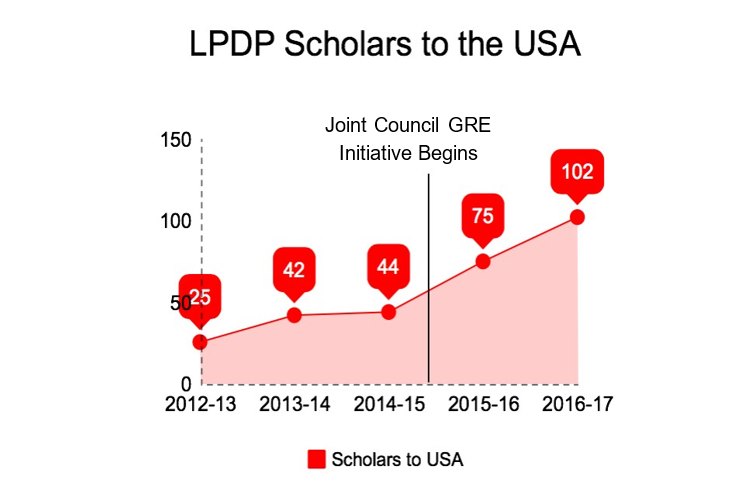 Contributions to the Fund came from the following nine U.S. universities in addition to support from the Indonesia-based Ancora Foundation: