The Indonesia-U.S. Council on Religion and Pluralism is an independent, bi-national, non-governmental body to undertake joint programs to share and promote the values of pluralism, diversity, and tolerance.
Established in August 2016, the Council has been endorsed by President Jokowi and President Obama. 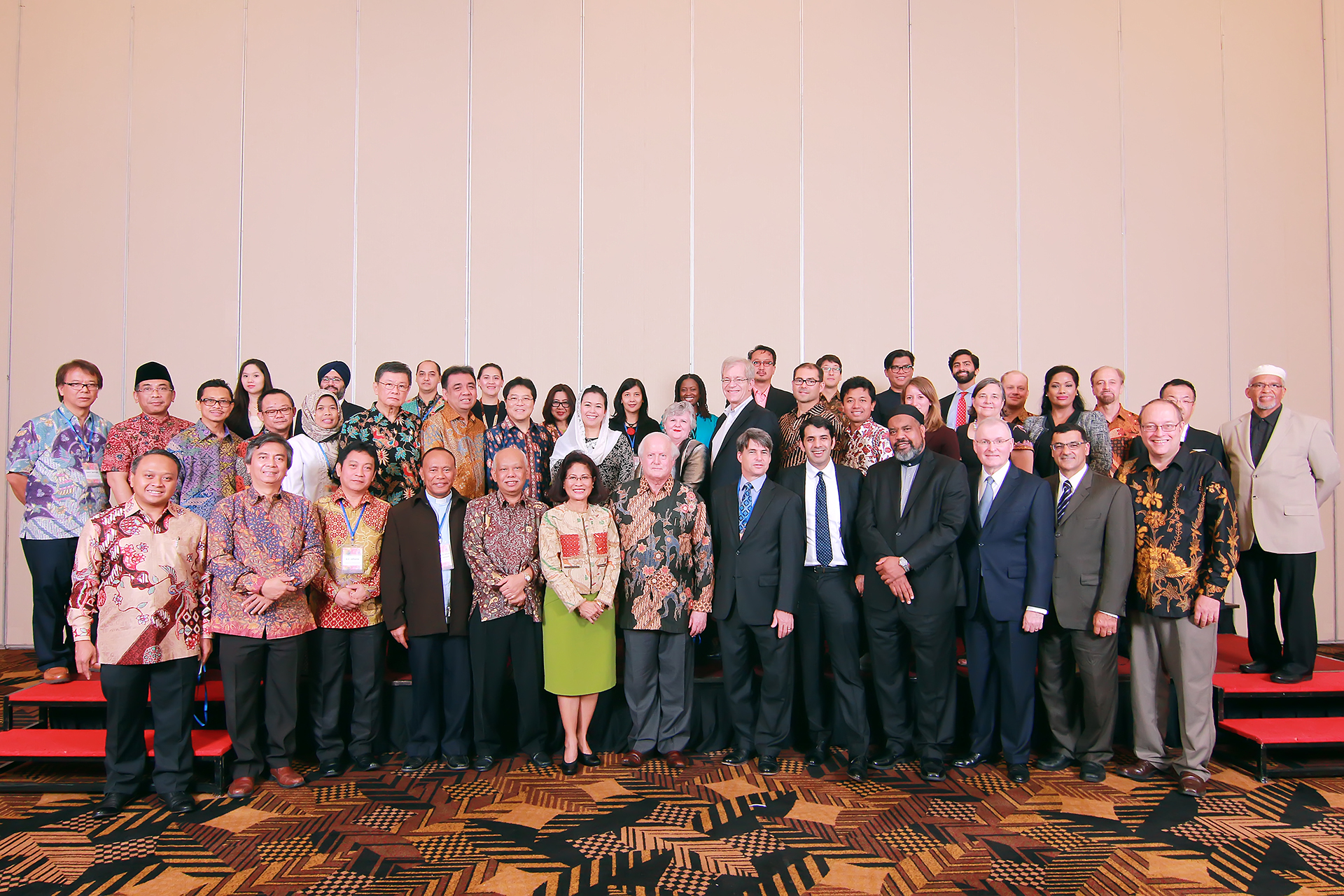 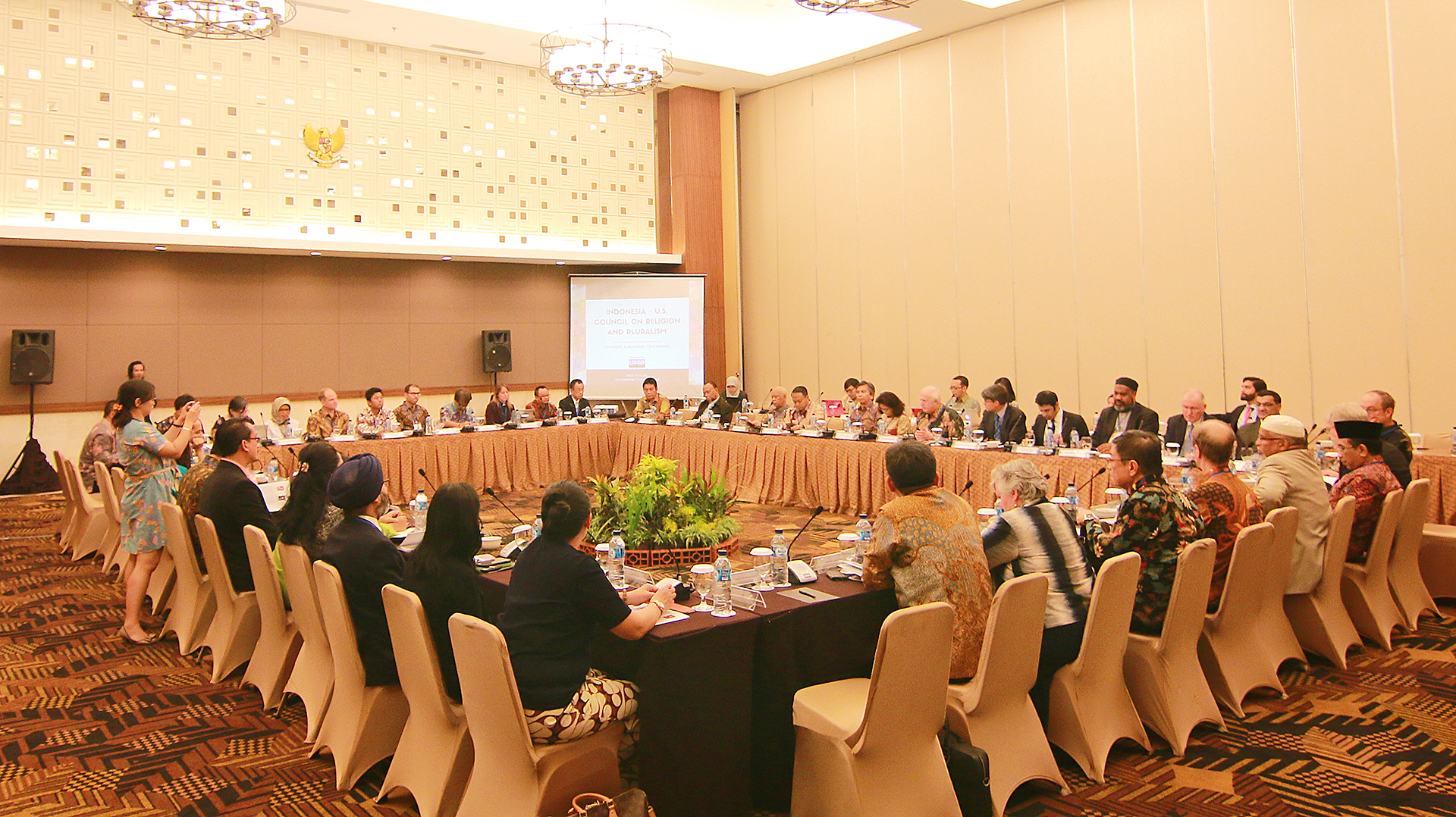 Since its establishment in August 2016, the Council with the assistance of USINDO, has conducted extensive research in identifying potential donors to fund the programs of the Council’s three Working Groups. From this research, the Council has had two opportunities to formulate funding proposals to two highly potential donors: U.S. State Department’s Bureau of Democracy, Human Rights and Labor and the Carpenter Foundation. The Council also expects to submit funding proposals to three other highly potential organizations which have upcoming submission deadlines.

In addition to developing long-term project plans to be considered by prospective donors, the Council has already begun to be recognized as a viable network for U.S. and Indonesian religious, government, and civil society leaders to cooperate and gain insight on issues of interfaith and pluralism in each country, as evidenced by several of the programs it has participated in, below:

On July 16, 2021, USINDO and The Indonesia – U.S. Council on Religion & Pluralism (CRP) hosted an exclusive in-person discussion in Washington DC on July 16 featuring CRP Executive Board Member K.H. Yahya Cholil Staquf, General Secretary of the Supreme Council of Nahdlatul Ulama. The discussion was attended by 20 people, representing the public, private, and civil sector.

Through this meeting, the Council members informed the Minister of the Council’s recent establishment and opened up discussion on possibilities of future collaboration. Among the results of this meeting included a possible visit in mid-2017 by the Minister of Religious Affairs to the U.S. Although the trip was eventually postponed to a later date, the Council significantly assisted in the planning of the activities and meetings for the Minister and his delegation.

Members of Working Group II of the Council, including Prof. Robert Hefner and Prof. Muhammad Ali, participated in a teleconference with Indonesian pesantren Leaders visiting the U.S. The pesantren leaders conveyed their enthusiasm to work together with the Council especially with regard to the Council’s proposed program to conduct joint conferences linking educators and religious leaders from both countries, as well as exchange programs for student and faculty members.

On January 16-17 2017, 30 Harvard Kennedy School graduate students met with several Indonesian Council Members of the Indonesia-U.S. Council on Religion and Pluralism in Jakarta and Yogyakarta and got insights from them on Indonesia's achievements and challenges in religious tolerance, economic growth, and education.

The Indonesian Council members along with several other prominent Indonesian religious leaders were invited to attend an interfaith dialogue session during the visit of U.S. Vice President Mike Pence to Indonesia in late April 2017. They were able to share their remarks and insights on the state of religion and pluralism in Indonesia with Vice President Pence. The Council’s Indonesian Co-Chair, Ms. Yenny Wahid, gave a short introduction of the Council and conveyed her hopes for future collaboration between the U.S. and Indonesia on the various issues of religion and pluralism faced by both countries and moderated this productive discussion.

On July 31, 2017, the Council facilitated a meeting between Prof. Brett Scharffs, Director of the International Center for Law and Religion Studies and Professor of Law at Brigham Young University, and Amb. Lutfi Rauf from the Coordinating Ministry of Political, Legal, and Security Affairs. Prof. Scharffs, accompanied by Ibu Yenny Wahid as Indonesian Co-Chair of the CRP, was able to have an open discussion and exchange notes with Amb. Lutfi Rauf on several recent issues concerning religion and the law in Indonesia. Through the meeting, Prof. Scharffs was able to share his insight on the matter from an American perspective and discuss with Amb. Rauf his opinions of how the law affects civil society, political affairs, and the freedom of association and expression in both countries.

Open Forum on Relations between Religious Majorities, Minorities, and the State in US and Indonesia – July 31, 2017

In cooperation with USINDO, SETARA Institute, and Wahid Foundation, the Council co-hosted a Special Open Forum on the “Relations between Religious Majorities, Minorities, and the State in US and Indonesia: Current Trends & Issues”. The discussion focused on the dynamics between religious majorities, minorities, and the government as well as the factors contributing to the growth of radicalism in both the US and Indonesia. Recommendations were also made towards the eradication of hate speech and the proliferation of tolerant perspectives.

The Council has sparked interest not only in Jakarta, but also in Washington D.C., where it hosted a meeting with a delegation of 10 Islamic school teachers and administrators from Indonesia visiting the U.S. under the U.S. State Department’s IVLP program. This particular IVLP project, which carried the theme of Faith Based Education, sought to introduce educators, administrators, and policymakers involved in Indonesia’s Islamic education system to religious education and life in America. The delegation met with USINDO President, Amb. David Merrill on September 13, 2017 and had an engaging discussion on issues of religion and pluralism, as well as the Council’s work in religious education. The delegation also continued on to visit Al-Fatih Islamic School, one of the most innovative U.S. models of Islamic religious education in the US, based on Amb. Merrill’s recommendations.

Discussion Meeting with Imam Mohammad Bashar Arafat during his visit to Indonesia - January 4, 2018

On January, USINDO facilitated a meeting between Imam Mohamad Bashar Arafat, President of Islamic Affairs Council of Maryland and Founder of Civilizations Exchange & Cooperation Foundation, and Yenny Wahid, Indonesian Co-Chair for the Indonesia-U.S. Council on Religion and Pluralism (CRP), as well as the Executive Director of Wahid Foundation. The purpose of the meeting was to have an exchange of views and experience between the US and Indonesia on topic areas related to approaches to interfaith understanding, approaches to religious education, and approaches to countering violent extremism, and other topics shedding light on religion and pluralism in the two countries.