The U.S. – Indonesia Society (USINDO) and AmCham Indonesia hosted a luncheon discussion in Jakarta August 1 for a six-person U.S. Congressional delegation. Highlighting the theme of expanding U.S.-Indonesia trade and investment, the discussion was held jointly with a large number of U.S. and Indonesian business leaders. Coordinating Minister General Luhut Pandjaitan was Featured Speaker.

The bi-partisan House Democracy Partnership (HDP) delegation was visiting Indonesia as part of HDP’s long-term commitment to strengthen ties and exchange legislative best practices with Indonesia’s parliament, and to be helpful to U.S.-Indonesia relations. 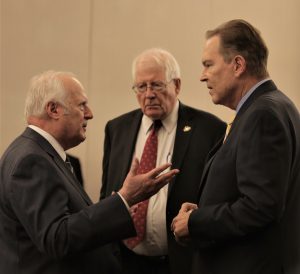 Congressmen David Price (D – North Carolina) and Vern Buchanan (R-FL) co-chaired the delegation. Congressman Price is Chairman of the HDP and a member and subcommittee chair of the Committee on Appropriations. Congressman Buchanan is ranking Republican on the Trade Subcommittee of the House Ways and Means Committee, and thus in a position to be helpful on U.S.-Indonesia trade issues. He also Co-Chairs the Congressional Indonesia Caucus. The  delegation also included Susan Davis (D-CA), Gerry Connolly (D-VA), Neal Dunn (R-FL) and John Rutherford (R-FL).

Jim Castle of CastleAsia briefed the audience on Indonesia’s environment for U.S. foreign investment. He cited such pluses as Indonesia’s relatively high growth rate, low debt, and good fiscal management. He commended the space Indonesia has provided for several IT-related companies led by young Indonesian entrepreneurs to grow to values of over $1 billion each.

Castle also gave his view of Indonesia’s foreign investment challenges, including a growing role for state enterprises relative to foreign companies, tending to cause some foreign investors to look more at opportunities elsewhere, and difficulties encountered in utilizing foreign expertise. He suggested the government consider encouraging more public-private partnerships, and other foreign investment policies that could accelerate the achievement of its economic growth goals. 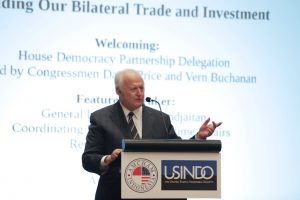 USINDO President Ambassador David Merrill observed that “Indonesia’s progress as a democracy has been remarkable, particularly in electoral participation and competitiveness, but strengthening the legislature’s capacity to deal expertly with legislative issues and provide checks and balances to the executive is still a work in progress.” He noted USINDO’s Legislative Partnership Program, working in parallel with the HDP since 2014 to exchange legislative best practices between DPR and U.S. staff.

Merrill emphasized the importance of working with Representative Buchanan on trade issues, in view of Congressman Buchanan’s position and interest. He recommended expanding contacts with members of the Congressional Indonesia Caucus, some of Indonesia’s best friends in Congress. 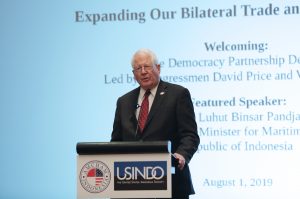 HDP Chairman Price said he considered the HDP partnership with Indonesia to have been one of the most rewarding aspects of his legislative career. He praised Indonesia’s recent presidential and legislative elections, and noted the importance of the functioning of democracy in the period between elections. He cited HDP’s close working relationship with USINDO and its Legislative Partnership program, reaffirming “I do believe that the joint effort is worthwhile and certainly we want to continue.” 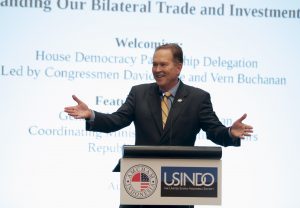 Congressman Buchanan emphasized the need of doing everything possible to expand trade and investment between the two countries and advance our mutual business interests. On such issues as trade and taxes, he felt a greater ability existed than people realized to work across the aisle to get more things done.

With all the US-China, MCA, US-Japan, India, and EU-UK trade issues, he said, we will need to work hard to get the attention of key policy makers on the important US-Indonesia trade issues. However, he offered to find the time to try to attain “win-win” solutions on US-Indonesia trade. On our trade volume, Congressman Buchanan said, “I think we can double what we are doing, somewhat into the future, but that is my vision for this country.”

Featured Speaker Coordinating Minister Luhut Pandjaitan highlighted two encouraging developments. The first was the recent Indonesian elections, perhaps the most complicated and yet peaceful election in the world, with 800,000 polling stations. 85% of voters turned out, including 50 million millennials.

The second was the economy — a testimony to the potential of the younger generation, including a growing number of start-ups that have each surpassed $1 billion in size. He cited Indonesia as a good place to invest, “where young talents meet opportunities.” 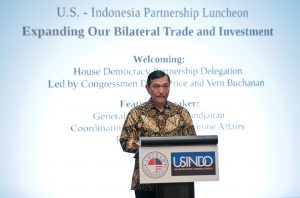 Minister Luhut noted Indonesia’s $1.1 trillion GDP, with an average growth rate of 5.7% per year over last the last 10 years. Inflation is acceptable, the poverty rate has been declining, the debt ratio is comfortable, and growth has become more equitable.

He assured the audience that the government under President Jokowi will continue to give priority to growth, income distribution, and infrastructure. Tax revenues are growing at double digits, he said. However the efficiency of tax collections remains an important requirement for sustaining growth.

He said Indonesian policy makers want to hear from US businesses about any issues which may need to be solved. He observed our two countries have much in common, including shared values of openness, fair competition, and innovation. Also, we are both large, diverse, resilient, and have a tradition of commitment to pluralism and tolerance. Thus, the government would like to see good U.S.-Indonesia relations. He welcomed the Congressional delegation and hoped they could bring good news about increasing two-way trade and investment.

The luncheon concluded with a lively Q and A session between the audience, Minister Luhut, and the Congressional Delegation.

For the complete video of this event, please click here.

For a photo gallery of this event, please click here.