Cordially invites you to an
USINDO Open Forum
Why has Corruption Persisted in the Reform Era?
An Assessment of Anti-Corruption Efforts in Indonesia 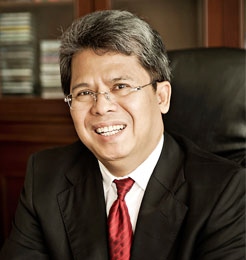 One of Indonesia’s highest priority challenges is reducing levels of corruption. Indonesians elected President SBY on an anti-corruption platform.  The Corruption Eradication Commission (KPK) has made important strides in combating corruption. KPK charges have led to the successful conviction of over 300 high Indonesian officials on corruption charges.  The explosion of social media in Indonesia has also helped tremendously in creating public awareness of cases and pressure for convictions.

However, corruption continues to be a serious and continuing problem.  Indonesia ranks 118 out of 174 on Transparency International’s Corruption Perceptions Index (2012) with 89% of respondents polled in Indonesia citing that they consider parliament and the legislature “corrupt or extremely corrupt”. The problem is complex: the new charges and convictions being achieved by the KPK also reinforce the public perception of corruption’s persistence.

High profile charges continue to be in the news.  Akil Mochtar, Chief Justice of the Constitutional Court, made global headlines after the KPK arrested him in a graft scandal.  Rudi Rubiandini, head of Indonesia’s oil and gas regulator BP Migas, has been arrested on suspicion of bribery.  In early 2013 the Prosperous Justice Party (PKS), the country’s fourth-largest political party, became embroiled in “beef-gate”, leading to the resignation of the party’s chairman, Luthfi Hasan Ishak, and the questioning of other senior PKS leaders.  The chairman of the PD, Anas Urbaningrum, and a senior party member, Andi Mallarangeng, resigned after the KPK named them as suspects in a corruption investigation.

USINDO is fortunate to welcome Pak Todung Mulya Lubis, a leading and respected anti-corruption practitioner, who will provide his insights on such key issues as:

– Why, after so many people have been arrested for corruption, does it continue?
– Are counter-corruption measures working?
– What can be done to reduce the prevelance of corruption?
– How difficult is it to eliminate the roots of corruption?
– Will money politics play a role in the upcoming elections?

– Can citizens be confident that the court will not be bribed if election results are disputed?

Please join us for this illuminating and timely event.

This event is open and free of charge. To register, please kindly RSVP HERE by October 16, 2013 at 5pm.