Cordially invites you to a 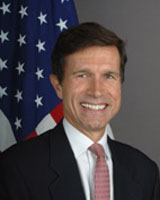 United States Ambassador to the Republic of Indonesia

President Jokowi has now been in office for nearly 18 months. After a swift start, he is now in the phase of most presidents’ terms where the relatively easier accomplishments have been made, but achieving the tougher ones that define a president’s leadership and legacy require managing, overcoming, or accommodating to long-standing political tenets and challenges, and perhaps, forging new realities.  The outcome will define what Indonesia will be in 2019 and beyond.

The interplay is taking place on many diverse fronts:  Indonesian foreign policy appears to be evolving toward increased international engagement.   Regarding internal politics, the President has consolidated his relations with political parties, leading to a calmer political scene compared with one year ago.

On the economic front, the government has announced measures to lift restrictions on foreign investment.  They represent important progress toward more open policies.  To be seen is whether they are effectively implemented and can lead to the needed levels of investment.  The President’s statement that Indonesia intends to join the TPP is clearly a very significant step, showing leadership.  What happens as Indonesia addresses how to meet TPP’s commitments will be equally significant.

Chillingly, Indonesia and the United States have now both become victims of ISIS-inspired terrorism.  How our countries address this shared challenge will be crucial.

Thus, now is an excellent time to increase our understanding of the prospects for fundamental progress on President Jokowi’s agenda, his style of governance, his relations with his party and parliament, and the state of Indonesian – U.S. cooperation.

USINDO is delighted and honored to present United States Ambassador to Indonesia Robert O. Blake, Jr., to give us his unique insights on these issues.  Ambassador Blake’s informal talk will be followed by Questions and Answers.  Please join us for this USINDO Special Event.

Space is limited.  Please RSVP HERE by noon Wednesday March 16.  You will be notified next week whether your rsvp can be accommodated or you must be placed on a waiting list.  USINDO may need to give priority to current USINDO members if necessary.  This event is open and without charge.  We request recording devices not be used.