A Film Screening and Discussion 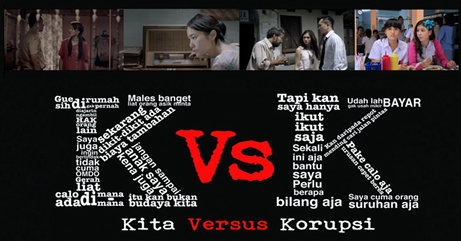 A key part of any anti-corruption effort is educating people about what it is, the varied contexts it occurs in, how to recognize it when they see it, and the choices available to be made to deal with the situation. As part of this effort in Indonesia, the film “Kita versus Korupsi” (Us versus Corruption) premiered last year in Jakarta and received widespread media coverage.  It was produced jointly by Transparency International Indonesia (TII), MSI’s USAID-funded Strengthening Integrity and Accountability Program (SIAP-1), and Indonesia’s Corruption Eradication Commission (KPK). Comprised of four short films, “Kita versus Korupsi” has resonated with citizens, officials, government workers, and police officers. Each short film illustrates the everyday situations in which corrupt practices can appear, and educates audiences about the choices to be faced. This event was co-hosted with PISA. Building on trust and mutual respect established over a twenty-five year history of working in Asia, PISA prepares leaders for the challenges and opportunities of the 21st Century and mobilizes networks of scholars, policy makers, and advocates on both sides of the Pacific to address urgent national and transnational concerns.