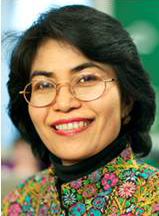 Deputy Head for Government Policy Support, Secretariat of the Vice President of the Republic of Indonesia

Ever since taking office in November 2014, President Jokowi’s foreign policy focus on “pro-people diplomacy” and developing Indonesia into a global maritime fulcrum has proved an interesting turning point . Some critics have labelled him as being too “inward-looking” and seemingly retreating from the idealistic globalism and regionalism of his predecessor. However, recent attention to the Indian Ocean Rim Association (IORA), intention to join the Trans-Pacific Partnership (TPP), and calls for increased international cooperation in efforts to counter violent extremism, have shown Indonesia to be taking a more outward focus on foreign policy as well. It being only in his second year in office, even more change could be underway.

These changes in President Jokowi’s foreign policy can also be viewed in the context of the history of Indonesian foreign policy and cycles roughly coincident with presidential terms of office. Each cycle has come with its own unique circumstances and challenges, thus forcing each president from Soekarno until Jokowi to adopt varying policies and stances in response to the domestic and international environment they might face.

How has the course of Indonesian foreign policy developed under the various presidential administrations that have held office? Has there been continuity or rather discontinuity between the foreign policy of President Jokowi and that of his predecessors? What are the current issues being prioritized and what are the main challenges being faced? What implications have these had for Indonesia’s relations with other countries, particularly the U.S. and China? What is the most likely direction of Indonesian foreign policy during President Jokowi’s remaining period in office and what policies must be pursued to lift the Garuda up to its full soaring potential?

The United States-Indonesia Society (USINDO), in cooperation with the Policy Analysis and Development Agency (BPPK) of the Ministry of Foreign Affairs, Republic of Indonesia (KEMLU), are delighted to host Prof. Donald E. Weatherbee, Donald S. Russell Distinguished Professor Emeritus at the University of South Carolina, USINDO Advisor and Prof Dewi Fortuna Anwar, Deputy Head for Government Policy Support, Secretariat of the Vice President of the Republic of Indonesia in this Open Forum. Please join us for this informative event.