Shortly after the new school year started, the Syiah Kuala University (UNSYIAH) Laboratory School celebrated its 5th Anniversary in late July with a school-wide party. The Lab School, which opened its doors on July 27, 2007, was established as a collaboration between USINDO, Syiah Kuala University, and the Sampoerna Foundation. During these five years the school has graduated three classes of students. Each class has passed the national exams and nearly every student has been accepted to college, a great record, particularly since the students come from a range of economic and social backgrounds. This co-educational senior high school currently has approximately 376 students in grades 10-12, over half of which are female, and offers classes in math, science, and social science. During the last year, the school gained accreditation, meeting the highest standards for high schools. They are making great strides and this is an endeavor we all can be proud of. 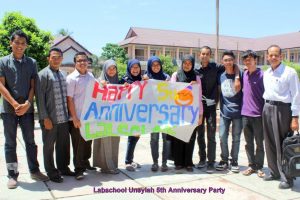 Students at the Lab School and Assistant Principal Pak Nasir holding a sign they made for the School’s 5th Anniversary. 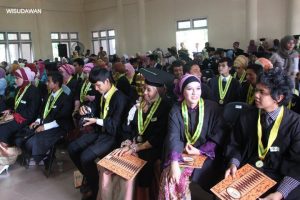